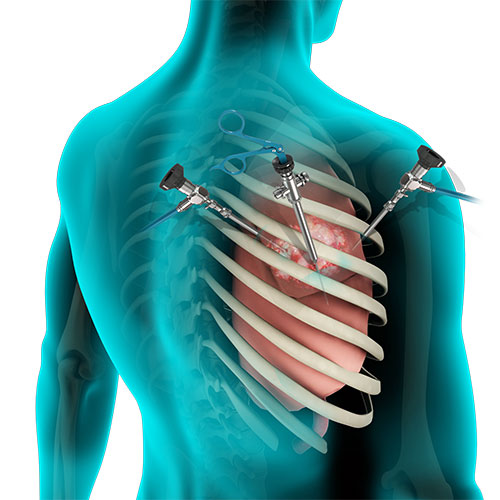 Lung cancer kills almost 160,000 Americans a year, and is the leading cause of cancer death for both men and women. In fact, more people die of Lung cancer than of, Breast, and Prostate cancers COMBINED!

The majority of patients with lung cancer present with advanced disease, but recent studies have shown a significant survival benefit with CT scan screening for former smokers.  Lung cancer screening should lead to earlier detection and thus earlier stage lung cancers.  Surgery is the treatment of choice for early lung cancer and offers the best chance for cure from lung cancer.

Lobectomy is the removal of a lobe of the lung, usually done to treat lung cancer. Traditionally, a thoracotomy was used to accomplish this, but the incision was large, and painful since this involved cutting or removing the ribs to access the thoracic cavity to perform surgery.  Patients would require substantial recovery time both in and out of the hospital, and the traditional thoracotomy approach led to many postsurgical complications.

(Left) Traditional Thoracotomy Approach with large incision and removal of the rib and significant rib spreading.. 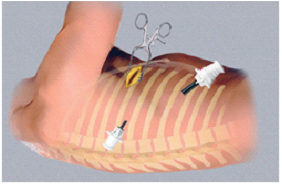 In conclusion, minimally invasive approaches such as VATS and Robotic surgery have greatly enhanced the ability of Thoracic Surgeons in treating Lung cancer, and should be viewed as the new gold standard of care.

Also, the minimally invasive technique allows thoracic surgeons to offer surgery to higher risk patients who would otherwise not be candidates for traditional surgery.

Dr. Samer Kanaan is a native of Kalamzoo, Michigan. When not in the OR, you will find him spending his time with his lovely wife and four adorable daughters.